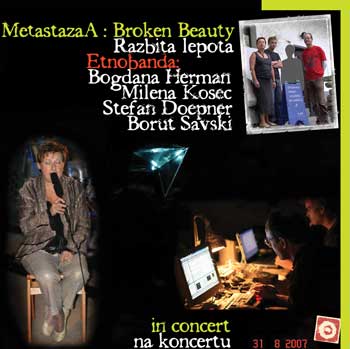 Selection of concert recordings from three performances in year 2007. Music opens a new stylistic area - so-called contemporary folk sound, and tries to promote another term: parallel music instead of serial music. It is a live sound improvisation with generative video approach.

Does computer produce sound or voice? Both. While living creatures start to tremble with horror, or the opposite - because of the lack of attentive sensing - the computers are becoming our pets with the growing ability for creative interpretation of their master's command. Of course, it means that the computer is able to surprise the master and the user. With the Scarecrow Statelet achieving the high level of distance to the real state, sublimating or - as a term - degrading to it's non-material self, its computers with ease deconstruct the physical basics of human articulation (volume, color, tone and - if you may - also the attractiveness of voice - here chemistry joins the physics), and what is being deconstructed the observer can, if he/she feels like it, reconstruct by the use of another sense - the vision. But this is just my interpretation of the moment, of what is going on under the name Broken Beauty.